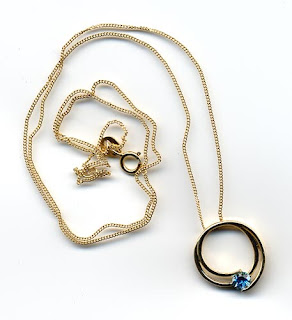 September 9/07 I received the news that I had won one of the only 5 http://www.cgknitters.ca pendants and then I received it in the mail on September 20/07. It's so pretty and I'd like to publicly thank Cynthia MacDougall, the editor of Knit Together and administrator of the CGK for her generosity! This pendant was created to celebrate her 5th year in business.

Cynthia wrote to me and explained the symbolism behind the design:
"The blue topaz was chosen because gold and blue are the official
colours of Canadian Guild of Knitters. I liked the way it represented
both the wrap of a circular needle (part of the new logo), with a
topaz spark where the knitting actually happens, *and* how it
represents the arms of a knitter at work, with the spark where the
needles are held."

I've worn it a few times and have already received compliments.
Posted by Brenda at 1:09 PM 2 comments:

Brenda
Waterloo, Ontario, Canada
it's all about me. 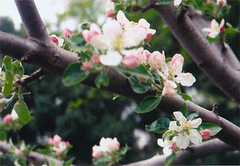